Many women think that menopause happens in their early 50s, where in actual fact symptoms of menopause, in particular during perimenopause (the transitional stage) can start at least 10 years earlier. Some women sail through without any symptoms and the only thing they notice is that their periods have stopped. The most common symptoms; hot flushes and night sweats, irregular periods, vaginal dryness, mood swings and loss of libido are well documented, however, this site delves into the 34 reported symptoms together with associated health issues and concerns.

Depending on the severity of your symptoms and your attitude towards them, some women pass through the change of life with minimum disruption and discomfort. For others, symptoms can be severe and debilitating. What matters most is how you feel and what works for you.

Perimenopause can last up to 10 years. This stage ends when a woman has not had a menstrual cycle for a full 12 months. At this point you have reached menopause and entered the postmenopause phase of your life.

Signs and Symptoms of Menopause

You will find information about age, stages and duration on the menopause facts page.

Click on the links for in-depth information about each of the symptoms.

Hot flushes/flashes and night sweats are as a result of estrogen fluctuations and gradual decline which disturbs your body’s thermostat.

Irregular Periods are determined as any alteration to your typical menstrual cycle.

Vaginal dryness can happen at any time in a woman’s life, but is more likely to happen during perimenopause and post menopause.

Mood swings are defined as rapidly changing moods. The decline in estrogen and other hormones occurring during perimenopause directly affects the neurotransmitters in your brain.

Loss of libido is affected by fluctuating and declining hormones, aging and physiological and psychological problems.

Allergies may be associated with hormonal changes taking place at perimenopause. Fluctuating hormones put pressure on your adrenal glands, this extra work can lead to adrenal fatigue, which can make you more susceptible to allergies.

Bloating is a common symptom related to an increase in water retention and/or intestinal gas caused by fluctuating hormones.

Brittle nails in menopause are increased by hormonal changes weakening the keratin layer, resulting in nails that tear easily.

Changes in body odour does not get the same exposure as other symptoms of perimenopause. Estrogen regulates your body temperature, namely the Hypothalamus. A decline in estrogen sends a false message to the hypothalamus telling your body that it is overheated, resulting in an increase in sweat production.

Dizziness though often overlooked is quite a common symptom. Fluctuating estrogen and progesterone, both play a part. Estrogen affects the nerves in your body so if lower levels are supplied to the brain this can cause dizziness. Progesterone is produced in the brain, therefore, if this hormone is lacking, the ability to feel calm is compromised.

Fatigue sometimes referred to as “crashing fatigue” is defined as a sudden overwhelming feeling of reduced energy levels, weakness and exhaustion. Although this can strike in perimenopause, most women experience it postmenopause.

Hair loss causes one of the strongest reactions amongst women, however, if the hair loss is menopause related, the effects are rarely permanent. When the female hormones decline, the production of the adrenal cortical steroid (androstenedione) becomes more prevalent causing hair to become thinner.

Bladder incontinence can occur due to declining estrogen levels. Estrogen is responsible for keeping the bladder lining, the urethra and the pelvic region healthy. Reduced estrogen causes the pelvic muscles to become weaker.

Heart palpitations are reported by many women in perimenopause. Heart palpitations, irregular heartbeat or pounding pulse episodes can sometimes be accompanied by hot flushes and night sweats or stress and anxiety.

Insomnia and other associated sleep problems are one of the most distressing symptoms of menopause. US statistics show that the rate of insomnia rises at a rate of 40% during the transitional phase of perimenopause through to postmenopause. Insomnia exacerbates other menopause symptoms such as mood swings, heart palpitations and hot flushes.

Weight gain is one of the most distressing symptoms of menopause. Often referred to as “unexplained weight gain” or “middle aged spread”, this is caused by changing hormone levels. Even those women who have never had a weight problem may find it difficult to manage their weight in the lead up to menopause.

Osteoporosis becomes more prevalent postmenopause. The breakdown of bone outpaces the building of new bone due to the decline in the female hormones, estrogen and progesterone. This is a serious condition which can lead to severe health problems.

Anxiety, although a mental health issue, can be attributed to the physical changes that women encounter during perimenopause, particularly if a woman has experienced symptoms of anxiety disorder before.

Depression is most likely to hit during perimenopause. Between 8% and 15% of women experience some level of depression due to constantly changing hormone levels.

Irritability is a common complaint of both perimenopause and postmenopausal women due to the emotional and physical effects of the transition towards menopause and the years following. Other symptoms such as insomnia, loss of libido and lack of concentration can attribute to irritability.

Memory loss, “brain fog” is a common complaint of women in perimenopause. It is reported that this symptom is most acute during the early period of post menopause.

Panic attacks – women are twice as likely to experience panic disorder than men and most frequently during PMS, pregnancy and menopause. Medical experts have concluded that hormone imbalance is most typically the underlying cause.

Fibrocystic Breast Disease/Condition  (breast pain) is the result of hormonal changes. It can occur at any age with a peak incidence between 30-50 years, covering both childbearing and perimenopause.

Hormonal headaches in the perimenopausal stage can trigger an increase in migraine attacks due to fluctuating hormone levels.

Joint pain is due to the joints getting less estrogen. Estrogen positively affects joints by keeping inflammation under control, therefore, as estrogen levels decline during perimenopause, pain is often the result.

Digestive problems in perimenopause are caused by hormonal imbalances which has an effect on gas, constipation, IBS and bloating.

Oral Health problems can become more prevalent post menopause and is associated with both declining estrogen and the natural aging process. It is important that you are aware of the symptoms and causes.

Electric shock sensation is one the less common symptoms of menopause. There is a range of sensations and although it can happen at any time, it is known to occur immediately before a hot flush.

Itching is caused due to declining estrogen. As estrogen plays a key role in maintaining healthy skin this decline can cause skin to become itchy, dry/crawly.

Tingling extremities (cold hands and feet), is categorized by numbness and pins and needles sensations in the extremities. In menopause, it presents due to hormone shifts affecting the nervous system.

Asthma – there is a connection between low estrogen levels and asthma, although to date studies remain conflicted. It is known that when estrogen levels fluctuate and drop significantly this may cause inflammation in the airways.

Dry eye syndrome can occur due to declining hormone levels, which can affect the ocular tissues and the tear composition made by your eyes. Common symptoms include light sensitivity, dryness, blurred vision and burning/sandy/gritty feelings. Contrary to that, if you are experiencing teary eyes this can also be a sign that you eyes are trying to make up for a lack of moisture.

Dry mouth syndrome occurs when there is not enough saliva in your mouth. Fluctuating and changing hormone levels often leave perimenopausal and post menopausal women with a continual feeling of dry mouth.

Restless leg syndrome has an association with menopause, but is not caused by it. It is known that estrogen helps our muscles to relax, therefore, as low estrogen levels can impede the absorption of estrogen into muscles this can cause RLS symptoms.

Tinnitus is one of the lesser reported symptoms of menopause. Although more research needs to be carried out on this subject, there is evidence to support that fluctuating hormones and hormone replacement therapy HRT can cause or worsen Tinnitus (ringing in the ears).

Many of these symptoms of menopause are related to estrogen deficiency and in some cases, estrogen dominance or a deficiency in progesterone.

What You Can Expect Postmenopause

Your hormones will continue to fluctuate and decline for some time into postmenopause. This is often accompanied by symptoms that may take several years to disappear.

If you are struggling to manage your symptoms at your place of work, you will find information to help you in this article Managing Menopause in the Workplace.

In November 2015, NICE (National Institute for Health and Clinical Excellence) UK, issued the first guideline on diagnosis and managing menopause. You can find the guideline for professionals and a simplified version for women patients here.

Keep everything in perspective, learn to know your own body and recognize the changes it is going through. Having a clear understanding of options available to you will help you to manage your symptoms. Although some women report experiencing symptoms up to 10 years postmenopause, most will improve independently within a 2-5 year timescale after your final period. This stage of your life can be a positive change. It is a time for changing your lifestyle habits such as increasing your activity levels, eating fewer calories and engaging in mentally challenging activity. Such changes will help to prevent illnesses that commonly present ten years after menopause as women approach 60 such as diabetes, osteoporosis and heart disease. 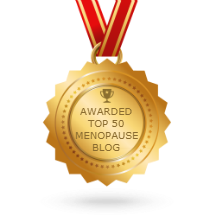 Disclaimer: The information and resources on this site are not intended to supplement or substitute for the expertise and judgement of your healthcare professional. Adverts on this website are not endorsed by MHM.